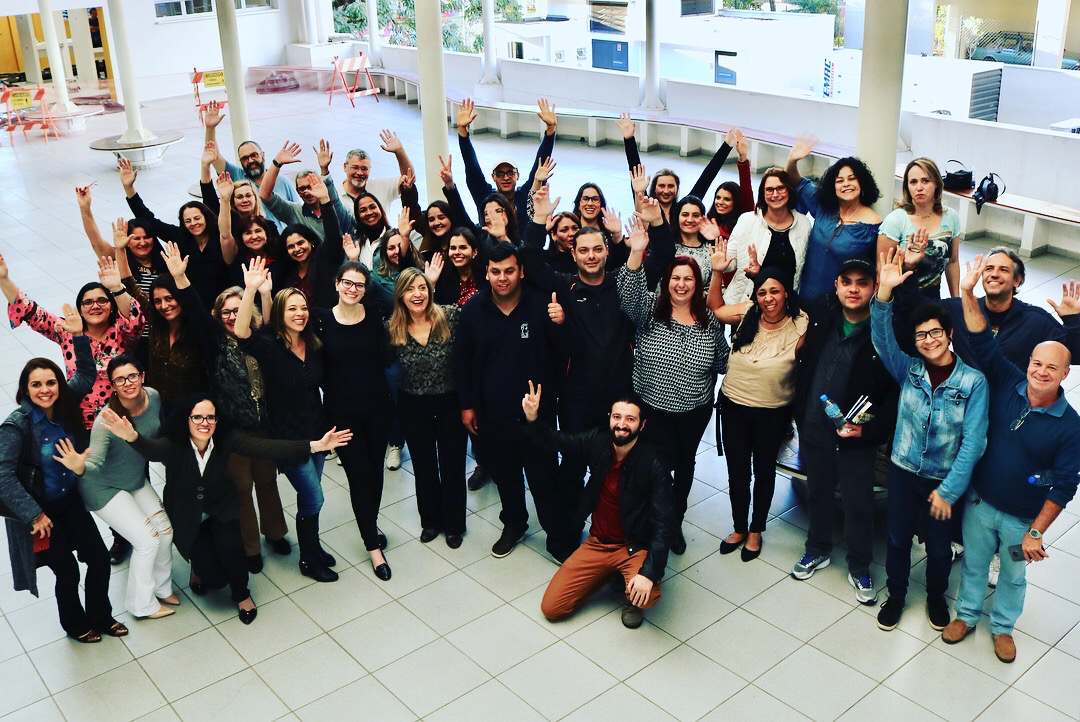 Extending its partnership with the state’s Secretary of Education, STEM Brasil trained 392 new teachers from 37 cities across the state of São Paulo.

STEM Brasil has been part of the educational system in more than 670 public schools in 16 Brazilian states. With this new phase in São Paulo, 56 more schools are now part of the program.

The training was led by Anderson Sakuma, STEM Brasil and STEM México Program Manager, and the training was held from August 8 to 13 at the School for Teacher Training and Improvement (EFAP). 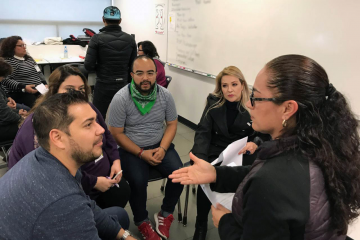 Follow-up in the Rassias® Methodology in Baja California 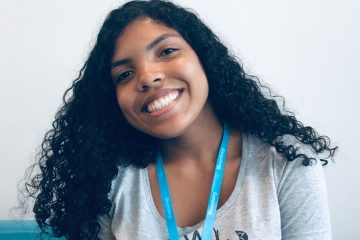 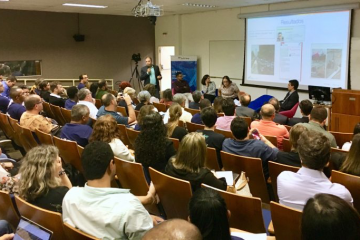 Educando participates in the STEM TechCamp in São Paulo

"In IAPE I could find a family"

“I could find in IAPE support, a family, and that is the most wonderful aspect because we are not alone; in fact, we work together. In the two-week course we became family, we gave each other feedback, we helped each other, and we encouraged one another.”

"I am happy to be part of a LISTO generation”

“I used to struggled a lot to concretize actions, organize my time, establish the pedagogical dialogue that would serve as analysis guidelines for managing projects that turn into actions. Before, I was alone, without companions. But when LISTO came along everything changed. For the past three years, it has supported me in my conduct as a school leader. I feel fortunate, strengthened in both areas, personal and professional. I am happy to be part of a LISTO generation.”

"LISTO gave me the opportunity to focus on leadership"

“I cannot speak about the LISTO program without reflecting on the transformation it has caused within me and in my attitude towards serving others. LISTO gave me the opportunity to focus on leadership – particularly the educational, human, and social aspects of it – especially so I am able to unite and grow with my educational community.”

Isabel Abrego, LISTO participant since 2014. He is the principal of Centro Escolar 1940, a primary school in Hidalgo, Mexico, and a leader in his community.

"I want to become a biologist"

“The practical classes that STEM Brasil has provided for our teachers are essential for the learning process. With the lab classes I have been able to develop myself much better. Especially for me, as I want to become a biologist, the experiments at the biology class are extremely important.”

"I can see myself putting these skills into practice"

“I didn’t imagine it was going to be like this. Like this fun and entertaining that the hours would pass by without feeling the exhaustion. I knew it was going to be good, but I didn’t think it was going to be this good. The Rassias Method® is a very beneficial system for young people, for children, or even for us because we are learning so much here. I am very happy. I can see myself putting these skills into practice.”

“IAPE transformed my teaching practices in the most meaningful way. I had previously attended several programs, workshops, and online-courses which had enriched my lesson plans and projects. Nonetheless, something was missing. Everything changed in 2013 when I attended my first IAPE program in Hanover, NH. This allowed me to be trained in the Rassias® Method by its creator, John Rassias. The techniques of the Method helped me to regain my passion for teaching and to include one missing element: truly caring for my students. Upon returning to Mexico, I used every opportunity to implement the techniques in my daily classes. Each IAPE program is a celebration of the power of education. We celebrate that we care for our students. We celebrate that love through teaching transforms.”

Hugo Maldonado, IAPE participant – so he is ‘an IAPEañero’

"Everyone has a happy and committed attitude"

“I arrived with a lot of expectations about what I was going to do, what was going to happen, and I was even a little suspicious, but I saw that everyone had an attitude that I call the ‘IAPE-Educando’ attitude: happy, full of energy, committed, and they really care about people. I basically identified with everyone.”

"We are committed to change in the school community”

“The LISTO program has significantly impacted my personal and professional life, because I now see the world with fresh eyes, with more commitment, and I try to transmit this commitment to my colleagues. I’m more of a team player. I know it’s not easy to change, but I have faced the challenges, and have challenged my colleagues. I think that the results are reflected in the children, in the parents, because the school community participates more. We see significant progress, although they are not at 100% yet, we have begun the process. We are all committed to that change in the school community.”

“I really like practical activities, they are very different classes. STEM Brasil makes you shift from this observer position and you become part of the class, as a key player. You do a lot more and therefore, you learn a lot more.”

"This is the best for our vocation and love of teaching”

“I heard of LISTO through one of my principals. I became involved in the program, but not entirely. When I received the invitation, I joined because I had really liked it and I convinced four of my principals to sign up as well. I’m very happy. I have seen transformations, and I feel revitalized because that is what these training do with you. I was able to apply a project that has fascinated me, involving retired teachers, teachers from the school, the principal, family members, and of course the students. We have had very good experiences. I think that this is the best in terms of vocation and love of teaching.”

"I want to become a programmer"

“The practical classes that the STEM Brasil program offers are really good. Everything is very dynamic and we become more involved with what is happening in the classroom. There is always an experiment behind a theory, and that makes us understand more clearly what is being taught. Because of STEM Brasil I found out that I want to become a programmer.”

"More than a teaching method, IAPE is a way of life"

“In 2013 I had the opportunity to participate in the IAPE program. What I realized was that it is more than a teaching method, it is a way of life. It changes your attitude towards your kids, how you teach and why you do it. But it goes beyond, it changes you and you work to touch lives.”

"STEM Brasil gives us another vision"

“It has been an extraordinary experience"

“It has been an extraordinary experience that has brought us many changes in our school. Significant changes, such as the integration in my teaching team, the work with parents who have turned their attention to the activities we planned in the school, who are now more aware and more interested in improving the education of children.”

“The differential element of LISTO, in comparison to other programs and for which teachers are very pleased, is precisely the approach with a focus on human development.”

“Hands-on learning activities that STEM Brasil program offers are certainly the best part of the week. At least for me, the lab classes are very inspiring. They make me question what I really want, they make me think about the future, setting goals in my life.”

“IAPE is a philosophy that, if you adopt it will change your life, and even more, it transforms the lives of students. I have been able to get many of these kids interested in the language. They lose their fear of speaking, which also encourages them to participate in other classes as well.
I have 500 students every semester. For the past six semesters, I have been teaching using the techniques I learned in IAPE. We are talking about 3,000 people whose lives I have changed thanks to this methodology.”

"More than anything, IAPE is a complete inspiration"

“More than anything, IAPE is a complete inspiration. It’s feeling integrated into a community, feeling the connection that the student should have with the teacher, connecting ourselves to one another with our emotions and our senses to learn the language because without that connection there is no successful learning. The Rassias® philosophy helps us discover our weaknesses and strengths. It helps us know who we are and what we are capable of doing, and how we are going to help our students lose the fear of committing mistakes.”

"The impact was very good from the first day"

“The difference in students’ classroom participation before and after I got trained by IAPE has been remarkable. The impact was very good from the first day. They came up to me at the end of the class trying to express themselves in English! They were grateful for knowing me as a teacher and surprised at the dynamics. My feelings were of complete excitement because of this response. The methodology used by IAPE has permitted me to keep the students’ attention and stimulate them to participate without needing to be prompted.”

"IAPE changes your life and the way you teach forever"

"We can learn through practice"

“STEM Brasil provides us the opportunity to perceive learning differently, via hands-on activities apart from theory. Oftentimes we can’t see with the theoretical approach how something is applicable to our daily lives. Through practice, we can learn how to use it and realize that the understanding of that subject is important.”